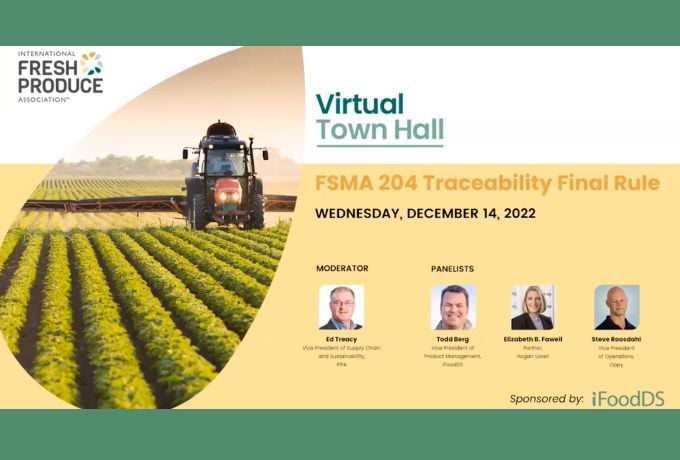 iFoodDS recently sponsored an IFPA webinar on the final version of FSMA Rule 204. Our own VP of Product Management, Todd Berg, was a panelist alongside Elizabeth Fawell, Partner at Hogan Lovells, and Steve Roosdahl, VP of Operations at Oppy and PTI Leadership Council co-chair. Ed Treacy, VP of Supply Chain and Sustainability at IFPA, moderated.

Elizabeth Fawell kicked off the discussion by providing an overview of the final rule. Watch the recording to see her explanation of the Rule 204 requirements. In this recap, we will focus on additional insights from the panel and audience questions. Here are the top highlights from the panel discussion.

Steve Roosdahl was asked about next steps for PTI to better support the industry in Rule 204 compliance. Roosdahl stated that PTI is already closely aligned with FSMA Rule 204, but there will be some adjustments to ensure full alignment. PTI will revise best practice documents, create templates for the industry to use, and use pilots to validate its guidance.

Roosdahl pointed out that lot codes in particular should be better defined to help the industry effectively track and trace products. For example, some growers have lot codes that are too refined, so they end up with pallets that contain 20 to 30 lots. This is too broad to help the FDA effectively trace. Conversely, some growers are too broad with how they define lots.

Surprising Parts of the Final Rule and Initial Reactions

Todd Berg was asked to weigh in on which parts of the final rule surprised him. He said that the final version of the rule was mostly anticipated, and overall, it’s a positive change relative to the proposed rule. “If anything, I was a bit pleasantly surprised by the significance of the changes that were made to remove first receiver and introduce initial packing,” Berg said.

Ed Treacy then asked Berg about the changes iFoodDS will need to make to its traceability software and the initial reactions of its customer base. Berg explained that iFoodDS has designed its traceability software to be highly configurable, so the platform won’t require significant changes to comply with the final rule. “We do expect, as we always do, to continuously make investments in optimizing the efficiency and overall user experience,” he stated. Berg added that suppliers and distributors can use the iFoodDS app to get the required information into the iFoodDS database and record KDEs and share them with their customers.

Berg also shared that iFoodDS enterprise customers are putting together plans for how to comply with the rule. “There’s more focus on how we are going to enable our supplier network,” he stated. “You can’t comply with 204 purely working within your own silo. You need to actually enable your supplier network, and that’s where we’ve been working closely with our customers.” Berg explained that iFoodDS is engaging with suppliers at whatever level of technology they have. If they’re currently using pen and paper, they can put into place simple-to-use traceability applications to capture KDEs. If suppliers already have traceability within their ERP or some other system, they can set that up to send data to the iFoodDS platform so their enterprise customers can have a single view of their network, traceback/traceforward, and produce an electronic sortable spreadsheet.

What Parts of Rule 204 Would You Change?

Steve Roosdahl and Todd Berg both weighed in on what parts of the final rule they would change. Roosdahl stated that it doesn’t make sense to only require additional recordkeeping for the foods on the Food Traceability List: “Having the Food Traceability List really creates exceptions in your processes, exceptions cause potential for error.” Roosdahl shared that Oppy will put the new recordkeeping processes in place for all commodities since they handle such a wide variety. It’s generally best to adopt PTI standards for all the commodities you sell. Ed Treacy added that he thinks major buyers will implement one set of rules regardless of whether the item is on the FTL or not.

Berg said he would have liked to see stricter digital recordkeeping requirements for organizations of a significant size. He is concerned that bigger operations who choose to keep paper records will find it difficult to translate that data into an electronic sortable spreadsheet in 24 hours. They may not be able to meet the deadline or may miss important information because of the level of effort it takes to maintain paper records. “There are systems like iFoodDS and others out there that really make digital recordkeeping for traceability easy, and I would love to see the industry step forward further in that capacity to lower our dependency on paper records,” Berg stated.

Penalties for Noncompliance with Rule 204

Ed Treacy asked Elizabeth Fawell what consequences there would be for companies who do not comply with Rule 204 after the enforcement date. Specifically, how would the FDA handle a company that isn’t doing anything or has inaccurate or insufficient data? Fawell explained that legally, it’s a prohibited act to fail to comply with the requirements. The FDA has the authority to bring civil or criminal actions against such companies.

However, Fawell stated that the FDA has made it clear they intend to educate to drive compliance. “I can foresee maybe a warning letter being sent to a company, I can see some sort of public chastisement maybe, if FDA is frustrated. But ultimately, I think the consequences are going to be, quite frankly, to the detriment of the public health, which we don’t want. And so we want to facilitate … the rapid and effective tracing of food to mitigate foodborne illness outbreaks. I think that time will tell. I expect a gradual increase in enforcement, but one that is really … driving compliance rather than penalizing people in a harsh way.”

Best Practices for Foodservice and Retail

Ed Treacy closed the webinar by addressing an audience question about best practices for foodservice and retailers. Treacy stated that best practice is to simply start. “What we’ve observed in PTI over the last 12 years is the retail and foodservice segments of the supply chain, other than a handful of industry-leading companies, have done very little on implementing PTI or traceability. And so, my advice, best practice – get engaged. If you want to know how to get engaged, look on the PTI website or call me.”

Overall, this virtual town hall provided an insightful, unique angle on Rule 204. We applaud PTI’s efforts to fully align with the final rule and we appreciated the insights from Steve Roosdahl on PTI’s next steps. We’re also grateful to Elizabeth Fawell for her perspective on the legal aspects of the rule. Todd Berg did a great job speaking to the capabilities of the iFoodDS traceability solution. If you would like to get more information about how our platform can help you comply with FSMA Rule 204, reach out to our team.