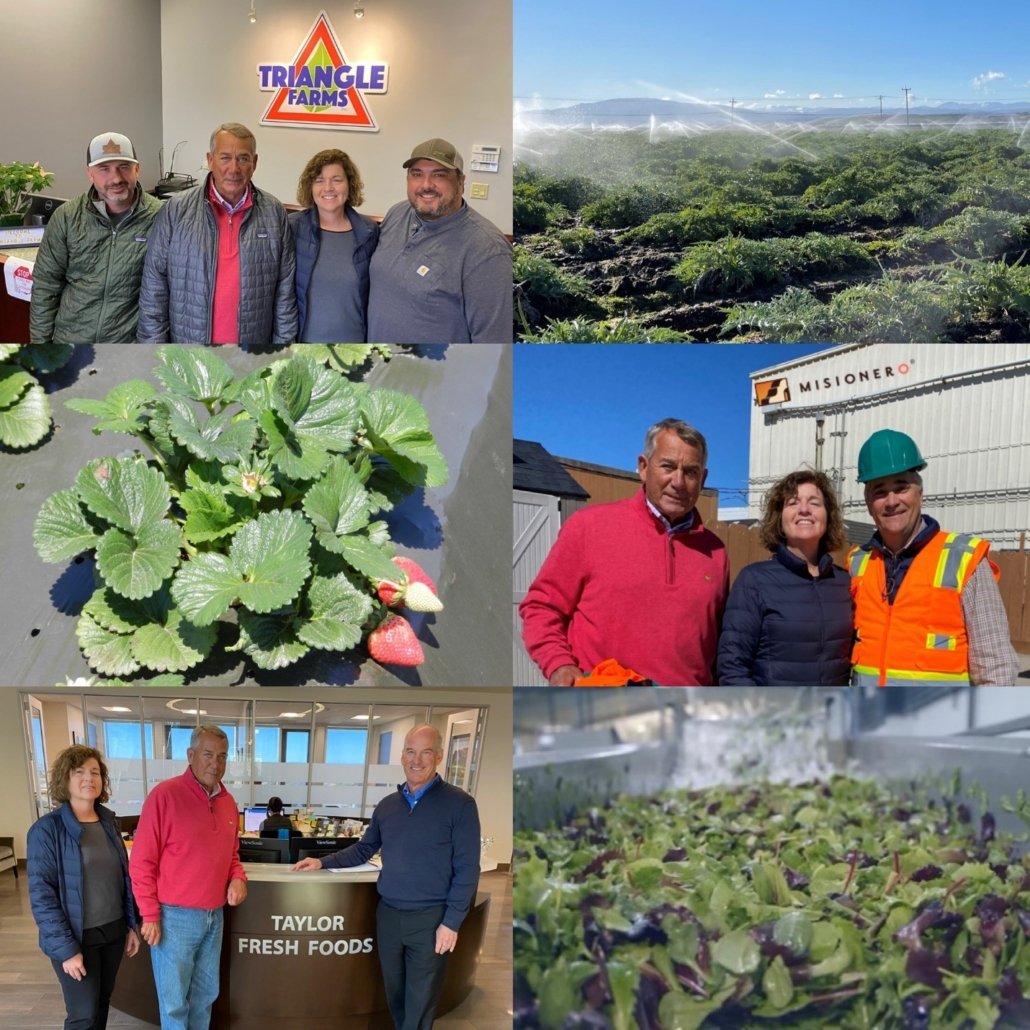 The iFoodDecisionSciences government affairs team – led by iFoodDS founder and board member Diane Wetherington and former US House Speaker John Boehner (R-OH), who has advised iFoodDS on strategies at the intersection of federal policy and business since 2020 – recently completed an intensive two-day listening tour in the Salinas Valley of California. The purpose of the visit was to hear directly from the people who power the American food supply chain as Congress begins preparation for a reauthorization of federal agricultural policy, set to begin in 2023.

Boehner, Wetherington and a team of public policy professionals from Squire Patton Boggs toured the Valley February 23-24, meeting with growers, processors, packers, shippers and local officials in an examination of the fundamentals of the daily work that goes into making the area the “Salad Bowl of the World” and the ways in which government policy can help – or hamper – efforts to maximize the production of safe, quality, abundant vegetables and fruit. The iFoodDS tour included site visits at several of the area’s leading production facilities in and around Salinas, CA, including Misionero, Del Monte and Triangle Farms, and discussions with local industry leaders, including Chris Valadez, President of the Grower-Shipper Association of Central California; Tim York, Chief Executive Office of the California Leafy Greens Marketing Agreement (LGMA); Bruce Taylor, CEO of Taylor Farms; and Jess Brown, Executive Director of the Santa Cruz County Farm Bureau.

Boehner, who served for years as vice chairman of the US House Committee on Agriculture prior to becoming Speaker in 2011, came away impressed – and convinced that initiatives such as the US Food & Drug Administration (FDA)’s New Era of Smarter Food Safety effort are going to be critical in bolstering the future of food safety and production in America. As stated by Boehner after the visit:

“The work being done across the Salinas Valley is remarkable. A shared commitment exists, even among competitors, to delivering the highest quality and safest food to America and the world at all times. Advances in technology have enhanced their ability to deliver on that commitment. But it’s clear there’s still some work to be done in the area of forging industry-government partnerships, and some potential that could be tapped to the benefit of consumers in the form of even further enhanced food safety and security.”

Boehner said perhaps the biggest takeaway for him personally from the trip was an insight shared by Tim York of the California LGMA.

York, highlighting an April 2021 Wall Street Journal piece, noted that the US airline industry has been able to achieve an astonishing safety record since 2009, largely as the result of a shift to a collaborative approach among industry stakeholders and government regulators.

A similar revolution may be around the corner in American food safety if the right policies are put in place, Boehner said.

Wetherington and iFoodDS have spent two years working with public policy professionals at Squire Patton Boggs to elevate the discussion in Washington, DC about the future of food safety and the potential for collaboration between industry and government made possible by technology-based solutions such as those pioneered by iFoodDS. Those efforts have fostered discussions with numerous policymakers at the federal level on both sides of the political aisle as Congress and the White House begin laying the groundwork for legislative action in 2023 on the next comprehensive overhaul of federal agriculture policy.

A bipartisan effort spearheaded by the Salinas Valley’s representative to Congress, US Rep. Jimmy Panetta (D-CA), offers a glimpse of the modernization envisioned by some in the food safety arena. Panetta and a group of colleagues have called for the inclusion of legislative language in the Fiscal Year 2022 agriculture appropriations bill that would further encourage coordination and communication among growers, food safety organizations, and the federal government with respect to food safety and traceability. The goal of Mr. Panetta’s legislation is to ensure that government and industry together are equipped to identify and recall contaminated product more swiftly and accurately in the event of an outbreak.

Mr. Panetta and his colleagues were successful in persuading House appropriators to include the language in the House version of the FY 2022 agriculture appropriations measure, but the House and Senate continue to deliberate as of this writing on a final version of the bill that will go to President Biden’s desk to be signed into law. iFoodDS has strongly backed Mr. Panetta’s efforts, which have also attracted support from prominent organizations such as Western Growers Association.

The biggest test, however, will come during the next Congress (2023-24), when legislators begin formal consideration of the next federal farm bill in what will be a comprehensive update of current federal agriculture and food safety policy. iFoodDS has engaged with many of the Republican and Democratic legislators who are expected to play a lead role in crafting that legislation, educating lawmakers and staff about the potential of a collaborative and technology-supported approach to food safety in America.

iFoodDS will continue to work to drive the public policy dialogue in support of common-sense food safety solutions that maximize quality and safety at every stage of the supply chain.